Which CMOS Sensor Is the Right One for My Application?

CMOS sensors have largely replaced their CCD counterparts in image processing. The more modern technology has developed very quickly in recent years, with Sony--as one of the major manufacturers of CMOS sensors--playing a significant role. The IMX-series models are among the sensors most frequently used in industrial cameras. This text explains the main differences between the various IMX model series from Sony, which are also known as Pregius, STARVIS and Pregius S.

Just a few years ago, CCD technology made up by far the largest share of sensors in cameras for industrial image processing. At that time, CMOS sensors were considered a promising but not yet mature technology in which even experts did not see any immediate serious competition to the established CCD sensors.

This changed abruptly when Sony, as one of the most important international sensor manufacturers, announced the discontinuation of its CCD production at the beginning of 2015, thus heralding the end of the CCD era in industrial image processing and in many other areas. About two years earlier, the company had introduced the first of (currently) four generations of a new CMOS sensor family called IMX, which caused a particular stir with its significantly larger dynamic range. These sensors, which are still available, enable short exposure times, have the selection of trigger and readout options required in image processing, and allow images to be captured in outstanding quality that exceeds that of competing sensors in the same price segment.

One of the reasons for the high image quality of IMX sensors is a special technology from Sony called Exmor, in which the noise-reduced analog signal recorded by the sensor is converted into a digital signal directly when the pixels are read out. This approach distinguishes IMX sensors from those of other manufacturers and not only improves noise performance, but also enables higher frame rates. Another particularly important feature of a sensor is its shutter, which corresponds in its functionality to the aperture of a conventional camera, and is implemented in the sensor electronics. In industrial image processing, two different concepts exist here:
In sensors with rolling shutters, the lines of a sensor are exposed and read out one after the other. In applications with moving objects, this procedure leads to a time-delayed exposure of the sensor lines and, depending on the inspection situation, can cause undesirable distortions in the captured images.

Sensors with global shutter work differently: they read out all exposed pixels at the same time and in this way ensure that images of moving test objects or images of moving vehicles can also be captured without distortion in traffic applications.

In addition, the Sony developers integrated functions into this first IMX generation that brought large advantages for use in industrial image processing. These include the capability of defining smaller regions of interest (ROIs). This limitation of the sensor readout area allows the speed of image acquisition to be increased and the size of the image data for data transmission to be reduced. This feature comes into its own when only certain partial areas need to be viewed for the inspection of objects.

IMX174 and IMX249 are the names of the sensors of the first IMX generation, also known as Pregius. These global shutter sensors work with square pixels with an edge length of 5.68 µm and a resolution of 1920 x 1200 pixels, and differ in their speed: IMX249 allows a frame rate of 41 frames per second, while the high-speed variant IMX174 reaches an impressive 166 frames per second.

For applications where a resolution of 2.3 megapixels (MP) is sufficient to solve the task at hand, cameras based on IMX174 and IMX249 sensors are often still the perfect choice today due to their high saturation capacity, high signal-to-noise ratio, and impressive dynamic range. 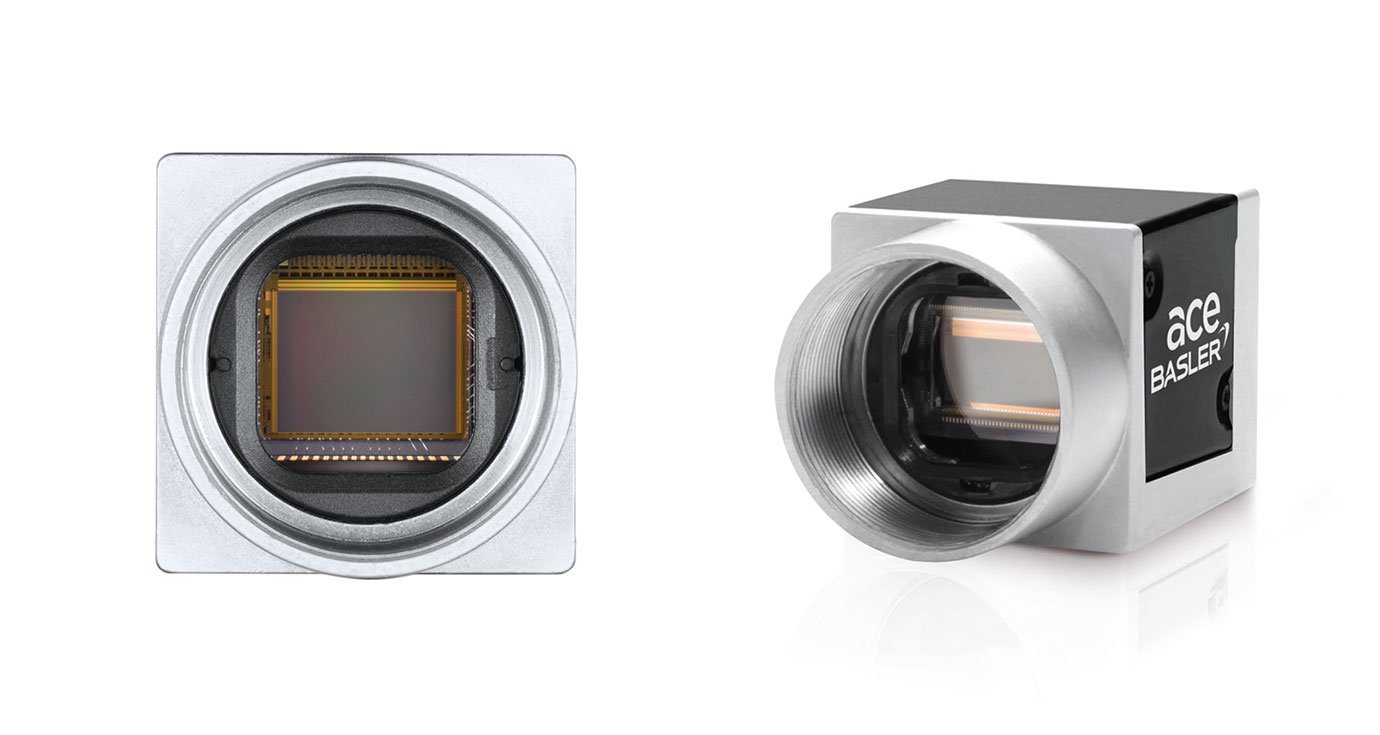 The range of possible resolutions increased significantly with the 2nd generation of IMX sensors.

Compared to the first IMX sensors, the second generation shows significant differences in saturation capacity, which is clearly below the values of its predecessors, but still in the range of CMOS sensors from other manufacturers. However, this characteristic is outweighed by the fact that Sony was able to almost triple the achievable resolution with a comparable sensor format.

With the STARVIS family, Sony has been offering a powerful sensor technology for quite some time, which initially existed only in different color variants and was used primarily in surveillance applications. After the introduction of monochrome STARVIS models, these sensors became increasingly interesting for factory automation applications. This sensor family from Sony was developed in parallel with the Pregius line and was initially only available with rolling shutter, but later also with global shutter. STARVIS sensors are also marked with the abbreviation IMX and work with square pixels between 1.85 µm and 3.76 µm edge length.

The most important distinguishing features between STARVIS and the Pregius generations 1 and 2 are the rolling shutter and the backside-illuminated technology of the STARVIS sensors. This sensor design, also known as BSI, is a sophisticated development by Sony that elegantly solves a problem: STARVIS sensors work with very small pixels of only up to 1.85 µm edge length. With such small pixel sizes, there is an unfavorable ratio between the areas available on the sensor for the light-receiving pixels and the required electronic components such as amplifiers or A/D converters. If the non-light-sensitive portions increase, the quantum efficiency of a sensor decreases.

Sony avoids this situation by placing the pure amplifier and evaluation electronics on the back of the sensor and not on the front, as is the case with conventional, so-called frontside-illuminated sensors (FSI). Only the light-sensitive parts of the sensor are placed on the front. This trick allows almost the entire pixel area to be used for the photoelectric response and reduces the reflection of light from the electronic components. In addition, the light-sensitive plane of a BSI sensor is higher than in the conventional FSI design, which also contributes to improved imaging performance.

The effects of this can be seen by comparing the absolute sensitivity threshold, which is defined in the EMVA1288 standard and indicates how much light, i.e. photons, the sensors need on average to generate a signal that stands out sufficiently from the noise. This value is 10 for first-generation Pregius sensors, while second-generation Pregius models achieve a value of 3 and STARVIS sensors achieve a value of 4.

Pregius S sensors combine the benefits of BSI technology developed for the STARVIS family with the global shutter approach of the first two Pregius series and continue to leverage the advantages of Exmor noise reduction.

Which CMOS sensor is best suited for an application depends on the task at hand. One of the decisive criteria here is the trigger speed of the cameras used and their sensors: If images are to be taken of fast-moving objects, triggering must be as fast and precise as possible. Here, Pregius sensors have better values than sensors of the STARVIS series: The time between triggering and reading out an image is only about 20 µs for Pregius sensors, while this time can be 450 µs and more for STARVIS sensors. Cameras with Pregius sensors are therefore the better choice in applications where precise execution of the trigger is crucial for image quality. Examples from industry include the inspection of very fast-moving objects such as bottles or printed circuit boards as well as motion analysis in sports. 3D applications or applications using multi-camera systems also benefit from the high trigger speed and accuracy of Pregius-based cameras.

Users are often looking for an adequate CMOS replacement for cameras that have comparable characteristics to CCD technology. For reasons of economy, it makes sense to select cameras with a CMOS sensor that requires the least possible adaptation of the existing lighting and optics. The formats of the Pregius sensors resemble those of earlier CCD cameras to a greater extent than the STARVIS series and are therefore more suitable for applications in which this argument is particularly important. For example, the 5 MP IMX264 and IMX250 variants of the Pregius series can function excellently as replacements for the widely used ICX625 CCD sensor. Cameras equipped with the ICX824 CCD sensor can be replaced with little effort by models with the 8.9 MP Pregius versions IMX267 and IMX255, without having to make major adjustments to the optical setup of the system.

STARVIS sensors, on the other hand, offer a clear cost advantage over the Pregius series. If the objects to be inspected do not have to be recorded in motion, the rolling shutter of STARVIS-based cameras is of little consequence. Due to their very small pixel size, these sensors also allow higher resolutions with a smaller sensor, but this must be considered when selecting the optics.

Sensor developments in recent years show a trend towards increasingly diverse functions in new models. With the second Pregius generation, for example, Sony introduced a multi-exposure trigger in which a single trigger impulse triggers the rapid capture of multiple images, and an object can thus be captured with different image brightnesses. In this way, the optimum image can be selected for subsequent image evaluation. This function is also available to users of the third and fourth generation.

This also applies to two innovations of the third generation, which introduced so-called self-triggers and dual-triggers in the high-speed sensors. With a self-trigger, two different image areas (regions of interest, ROI) are defined, and an image is taken of one of the two areas as soon as a change is detected in the other image area. The dual-trigger function, on the other hand, allows the definition of two different values for exposure time and gain, which can be controlled independently of each other. Self-trigger and dual-trigger are included in all fourth-generation sensors.

These examples show that the functions of previous sensor generations are usually carried over to the next development stage, giving users even more options.

Another important trend in sensor development is toward ever-smaller sensors with high resolution. This is made possible by ever-smaller pixel sizes, which are becoming possible due to advances in production processes. This miniaturization of the sensors results in the possibility of further reducing the camera sizes as well. In addition, in certain cases the number of cameras used can be reduced due to the higher resolutions. The use of cost-optimized camera systems also becomes possible as a result. With Pregius sensors, cost-intensive 1" lenses are often required, which can be replaced by less expensive but equally powerful lenses with the smaller sensor sizes of the Pregius S series. This makes the use of cameras with Pregius S sensors very popular.

As the world's most important sensor manufacturer, Sony has committed itself to CMOS technology, thus heralding the end of the era of CCD sensors and cameras. The technical features of the first four IMX generations--Pregius, STARVIS and Pregius S--offer developers and users in numerous fields of application, such as industrial image processing, extensive options in terms of available resolutions, speeds, and functions. Due to continuing further developments, it can be assumed that the next sensor generation will offer even more extensive technical capabilities.

Find out more about Basler cameras with IMX sensors from Sony.