There are three types of binning available: horizontal binning, vertical binning, and full binning. Binning in general will combine the information of adjacent pixel into a resulting information depending on binning mode. That will in any case lead to a reduced resolution by the factor of binning. But also it will sum the performance of each single pixel.

Binning will primary be used with monochrome cameras and following explanation will apply to those. Color cameras have Bayer pattern where in contrast the pixel with the same dedicated color have to taken into account. 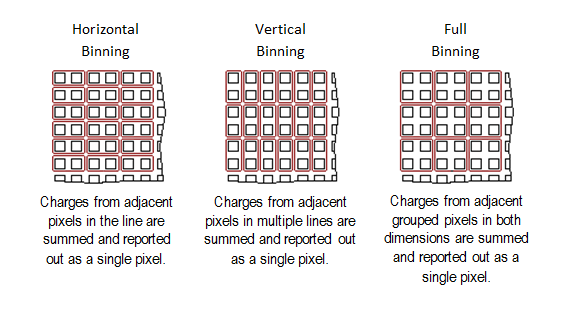 Using horizontal or vertical double binning generally increases the camera's sensitivity by up to two times normal. Full binning increases sensitivity by up to four times to normal. As the read out noise of each read operation is now just applied to less resulting pixel information the signal-to-noise ratio (SNR) is increased because of the reduced noise at higher combined signal. On some camera models, using horizontal or full binning increases the camera's maximum frame rate (this is not true for all cameras and depends on the architecture of the sensor used in the camera). This is due to lower digitization effort.

Binning with CMOS sensor has principally the same idea to combine pixel as with CCD sensors but due to the independently read out of pixel the implementation is more flexible. While the process of charge binning still can add-up multiple pixel information, allowing to trade image resolution for enhanced operation under low-light condition, another process is possible too. This is called averaging and builds the source pixel average information to the result pixel with the advantage of reducing noise in the result information.

We’d Be Glad to Help You